Showing posts from 2011
Show all

Where have we been?

This is for my friends and acquaintances at church.

Our church has recently hired a new pastor, and the process of selecting and hiring him was fraught with conflict. While my husband and I were surprised and saddened by some of the ways that disagreement was approached during that process, that's not why we have left. This new pastor seems not to be our cup of tea in terms of his personal and preaching styles, but that is also not why.

We also haven't exactly left; as the lyric above suggests, we're fumbling into a transition period and we're not sure what's next.

The reason we are entering this transition is because of the music pastor. If you've ever heard me onstage at our church, you know that singing in worship is my passion and my gift. If you have only seen me rarely, that is the problem. I have not sung in our contemporary service since December of '10, an…
Post a Comment
Read more

September 01, 2011
On New Year's Day of 1998 I wasn't a Christian. I was hung over, and I had to sing a gig that day, and I was feeling very scared. I had met a cute man the night before and it had been a relatively innocent, nonphysical encounter, but I still felt confused and ashamed. On January 4th I went to church for the first time, and the next week I went again. This was an evangelical church in the middle of Chicago, a vibrant church where the arts were valued and used brilliantly. The arts reached me immediately. I was in my thirties and my life was just starting to look better on the outside, but inside I felt battered and deflated and scared. I must have been desperate to go to church.

I remember a woman singing a simple song about how "Jesus doesn't care what you've done before." I remember a skit where a couple of men talked about how they were afraid a Christian woman would judge them. On Good Friday there was a video slide show of paintings of Jesus' final da…
Post a Comment
Read more

August 26, 2011
Here's what I wrote about the church thing. I don't know if anyone will end up seeing it but it clarified things for me. I kept my name out of it, and if you see it here, then you'll know it's me. But almost nobody reads this blog so I'll probably stay anonymous, at least for a while.

Open Letter to my Church: a Plea for Unity
At the town hall meeting to discuss our pastor candidate last night, there was a lot of anger. Some are upset that the search team’s work was not universally applauded. Some are unhappy with the church’s stated position on the role of women, and some are afraid that position might be changed. Some weren’t happy with earlier committee decisions and have lost faith in how our church is governed.

We are deeply divided. Our conversations about a pastor candidate are an expression of our division, not the cause. Here’s a thought: maybe we’re not arguing about the pastor candidate. Maybe we’re arguing because we don’t know each other, we don’t trus…
Post a Comment
Read more

August 25, 2011
In addition to my own personal church drama, our church is looking for a new pastor. The ways that churches make decisions like this can be byzantine and fall into grooves of tradition that I don't begin to understand.

Fast forward to a meeting last night, where discussion about a new pastor candidate was tense. To say the least. There were several elephants in the room, some of which got talked about ... sort of directly. Some not.

I was amazed and saddened and also fascinated. The biggest and baddest elephant is the one that trumpets loudly inside or outside so many churches, and that's the question of whether it's okay for women to lead in various positions. Our church has maintained an incredibly tenuous position that is (I think) a compromise. There are others who think it's intolerable.

This is an elephant that sort of got talked about. I am on the side of women being able to do things like preach and teach in church, but I have learned that having a woman as a s…
Post a Comment
Read more

August 13, 2011
Here's the deal. I haven't been able to sing very much at my own church for more than a year, for reasons that are tragic and stupid and sinful. It's turned me inside out and made me look at my own selfishness and made me rely on God. I have whined and harped about it for far too long, but it really has been unbearable in the way that growing experiences - those blessings that suck - are.

My husband and I have been exiles from church before. Church is one of those things that can't stay good, apparently. I have also been the one not singing many times, but always before I had to admit that the person who was singing was doing a great job (better than I could, the oft-ignored voice of truth whispered). This time the voice of the person who sings instead of me is not always pleasing to the ear, and the sweet aroma of worship has a not-so-faint stink of human pride. So we have had one foot out the door for quite some time, but there is no where to go. I kept wondering if …
Post a Comment
Read more

Forgiving. I know a lot about it. I can say wise things about it. I'm glad I have already learned that forgiving is for me, not for the other person. It frees me. It doesn't take the place of justice. It doesn't require an apology.

I know that God forgave me, and that shames me a little bit. Knowing that I am forgiven for all kinds of nightmarish things that I have said and done and thought should remind me how level the playing field is. But it doesn't. This is my selfishness and all that is so un-lovely about me.

But I'm noticing, now, that maybe I'm just stuck in a loop of blame and anger and fear and grief. The sin done to me is ongoing, and I'm experiencing it in the present tense, a…
Post a Comment
Read more

May 26, 2011
Long ago, before I got all fancy and went to graduate school, I never missed open mic night. It was at a gay bar on Halsted Street in Chicago, a bar that has changed names several times. I learned more there than I can express. These open mics were (are) state of the art as far as I'm concerned. There were two in Chicago then, hosted by well-loved and talented pianists who hosted the evening with grace and humor, and enforced a surprisingly high level of courtesy and respect in the room. They are still going on today.

Open mic night was frequented by a lot of us in various stages of aspiration and success. The talent level was pretty high, partly because this is a piano open mike, and we had a lot of trained theater singers and actors. I loved singing and making it all about me and showing off my new songs, and all that. But I loved listening too. I learned so much, and I was surprised by who I learned from.

Jacob rarely missed a Tuesday open mic. I didn't get much in the way …
Post a Comment
Read more

May 16, 2011
As a performing songwriter people would sometimes ask me advice about songwriting. Guess what was by far the question asked most often? "How can I make sure my songs aren't stolen?" I was always surprised by this and kind of saddened.

I always wanted to say "What makes you think your songs are worth stealing?" (But I didn't).

Are we good, and do we think we're good, and are we as good as we think we are, is another conversation I want to have. But for now, let's just say that the people asking me this weren't getting their songs heard by anyone. Maybe they were scared their stuff would be stolen, as if plagiarizers and song thieves haunt every jive-ass bar and cabaret, as if we, the artists, were flashing our gold chains in the wrong part of town.

Doing art, or music, or dance, or theatre-or-whatever isn't about possessing. That great American novel that we always hear is in someone's drawer isn&#…
Post a Comment
Read more

March 25, 2011
I am in a tough spot these days because you don't always get to pick who you make music with. It's made me think about how much I value the artists and musicians who are mature, and how soul-killing it is to work with the ones who aren't. Of course, the behaviors I complain about are familiar to me because I may have invented them. There isn't a single dumb, vain, mean, angry, sloppy, arrogant, or un-loving thing in the artists' hall of shame that I have not done. I look back on whole decades of my life as a performer and cringe. But, cringe is good, right? It means I have perspective.

In my symphony choir thing that I do, there is a woman behind me who is so busy commenting on others' mistakes I don't know how she has time to sing at all. If there is a bad note she chuckles. If the conductor makes a mistake she either yells out the correct answer or mutters it under her breath. At one point we were working on a song where the conductor really needed us to …
Post a Comment
Read more
February 28, 2011 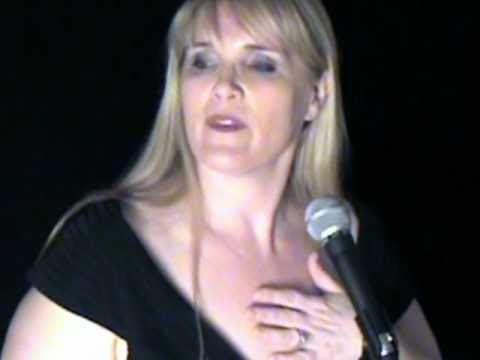 Well, we got nice video of me, but we didn't take a single photo of anyone else. Oh well. I guess I thought it was all about me. You'll have to take my word for it - we had a nice crowd, they had a great time, there was a cake. It was fun.

You can pick your seats. :)

Click here to buy tickets. Below is a diagram of the seating arrangement.

January 01, 2011
Saturday, February 19th at 7:30 p.m. Me, and the divine yet funky Wendel Werner on piano. I have six or seven new songs, I have a swanky off-the-shoulder top, I have publicity photos and postcards. A few minor details like rehearsals and we're ready. This show is not just the debut of my songs (and my new top); it's also the debut of the house concert, at least here on South Heritage Drive. Will we sell out? Will the cops shut us down? Will it be as fun and intimate and comfortable as I think? We'll see. Click on "Gigs" and "House Concerts" for more information. Tickets go on sale February 1st.

This show is a benefit for Heaven Sent Home, and I will post more information about the shelter soon.
Post a Comment
Read more
More posts