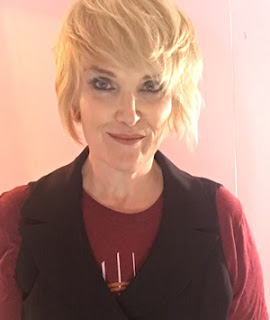 She thought playwriting was her trajectory, but she ended up in Chicago after college; she pursued musical theatre but ended up singing her original songs in Chicago's many cabaret and piano bar venues. "Ended up" is a recurring theme in Sarah's career, but she wouldn't have it any other way.

Her instrument is not voice but voices. While still in high school, she started writing and arranging songs for her three-woman group The Blondes, which started out as quirky a cappella songs written on staff paper with pencil, and really came to life during her cabaret years in Chicago. Her musicals and her pop songs are stuffed with vocal arrangements large and small.

During the Chicago years, she went back to school, picked up the building blocks of a second BA in music, and completed her MA at Concordia University in Chicago. The MA is a beautiful thing; it allowed her to refine her composition, conducting, theory, vocal pedagogy, choral pedagogy, jazz theory, and piano, without having to be an opera singer. Which she is not. The goal was to be a better writer, which she now is.

After the marriage and the MA, she and her husband moved to East Tennessee. On her third day in town, she auditioned for the Knoxville Choral Society and continued her love affair with choral music. Playwriting has also come back in a big way, and this time she might be ready.
She picked up guitar and ukulele the year she turned 50, and on any given day you will find her writing a song, writing an instrumental that sounds like a car chase or a sweeping vista, rehearsing with her new harmony group Blesser Heart, collaborating on musical theatre projects, practicing, practicing more, writing and arranging choral pieces, gigging, rehearsing with the Choral Society, and more - just not all at once.

Her songs have won contests all over the world, and she has signed songs for sync in TV, movies and other media. She's known for soaring melodies, witty, moving and brave lyrics, those delicious fat vocals, and her very funny onstage persona. She's always looking for co-writers, collaborators and co-conspirators because music is always better with friends.

In the songwriting context, that is. In the songwriter-education industry, there are lots of opportunities to get song feedback and critique, which I love and use. For the past couple of years, I've had access to an industry pro who's generally blunt, sometimes kinda caustic, and generally straight to the point from a commercial standpoint. I loved it. The first time she heard one of my songs, she hated it. So much. She thought that the verse was so long that she couldn't stand it (the chorus came in at about 45 seconds.) She wasn't rude or mean but she made it clear that the song was a little bit pathetic. I hate being treated like a beginner (it is, however, not The Worst Thing You Can Do to Me), and I was newer at this than I am now. I couldn't sleep that night and I felt raw and miserable from that kind of critical assessment. I can process all kinds of criticism and become grateful for it, but it's not pretty. She was right, and she helped me. A lot
Read more

I wrote plays in college and they ended up being produced. None of us knew about dramaturgy, the art of gently prying the script from the playwritght's hands and getting it into production in a way that benefits everyeone. I didn't know how to parse and understand criticism. I didn't know how to separate my powerful emotional wounds and colors from the ways that I needed to write about them.  So it came to pass that when I wrote my third play "All's Fair," I wrote about some personal stuff and I didn't have anyone to talk to me about how I'd written it and how to make it more effective, or anything. Playwriting had been incredibly lonely, even though the world was supportive and my shows seemed to do well.  "All's Fair" kicked me into a serious shame spiral and I had already been struggling with real life and my personal U-Haul of baggage anyway, and that's how I ended up "forgetting" about playwriting. I didn't make a c
Read more

Click here for new song vids I had my knee replaced in February. I thought it would be like, oh, this knee looks bad, let's just put in a new one. It was a little more complicated and a little more painful than that. But I've been feeling kinda mostly myself again, so I've gotten some work done, part of which was getting some songs videoed.It's been a rough year and a half and i've written some sad songs but this one is fun.  One of the rough things was losing one of my college friends, who passed away from cancer a couple of months after my dad died. I never know when I'm going to write a song about someone specific but this one just kinda happened all at once.    and this is kind of an old song but a fun one...   I've spent the last couple of weeks getting some vids of Blesser Heart done so you might want to check out our new website here.  I've also got a couple of sync songs cooking and I might even record some of those sad songs next time I am rec
Read more