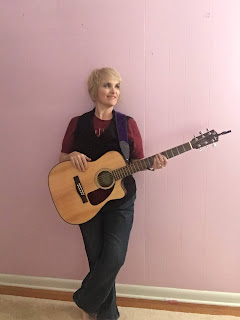 Classically trained, versatile, prolific songwriter / composer with roots in Broadway, pop and classical music. Sarah transplanted herself the first time to Chicago from Northern Virginia, where she built a singer/songwriter career singing original piano bar songs and harmonizing with her 3-girl group The Blondes. She got her masters' in music in her forties and loves that she knows how to find the cool chords now. Second transplant was to East Tennessee ("we were cold") where she learned how to play guitar, how to write country songs, and how to leave the cool chords out sometimes. Her songs have placed in and won contests all over the United States, and she has licensed songs and instrumental pieces for movies, TV and other media. She sings in the Knoxville Choral Society, performs with her harmony group Blesser Heart, collaborates on music theatre projects, gigs solo and with friends, writes and arranges choral music. She has returned to her first love, playwriting, and needs a few more arms to juggle it all. Most of all, she knows that "making it" in the arts is loving it, getting better at it, and making friends.

I got my start in Chicago as a singer-songwriter in piano bars and cabarets. Note: in East Tennessee, "cabaret" sometimes means taking off your clothes. In the rest of the world, cabaret is an intimate, usually piano-accompanied, singing performance. This, it turns out, is an important distinction. #thingsIlearnedthehardway

I went back to school in my really late thirties and ended up with an MA in music which is the best graduate degree for a songwriter (in my opinion). Since I got out of school, I got sucked into some of the best parts of real life (having a baby well after 40, and that's a whole 'nother story) and we moved from Chicago to Maryville, TN. Also, yes, a long story.

After my son was born and I emerged from the Who Was I, Again? period that is new motherhood, I have been gradually getting some semblance of a career back. It's going well. Knoxville is a whole different world from Chicago. Different venues, different music styles, different attitudes. I have met wonderful singers and musicians and been hired in strange and wonderful places. I am in my 9th season with the Knoxville Choral Society, which is everything from 140 voices strong behind the KSO singing Schubert and Mozart, to 16 women huddled backstage singing the ethereal ooohs and aaahs of "Neptune" in Holst's "Planets" (no concert dress, no curtain call: best classical gig EVER). For awhile I worked singing the rock&roll service at a Methodist church in Knoxville two Sundays a month. I still can't believe they pay me to do what I have always done for free. I have learned hard lessons there, made good friends there, and I loved polishing my pop harmony skills in a worship environment.

After finally smacking (hard) into the realization that piano bars, cabarets, and accompanists are very hard to come by here in E. TN, I was cornered. Change or die, I told myself, and I picked up the guitar. Shudder! Really didn't want to spend (how many?) years playing an instrument badly. But I had no choice. Around that time I started thinking about writing for the commercial market. People have always said something like "it sounds like it could be on the radio" or "it should be on the radio." I put my toe in by entering some songs in our local songwriter festival competition, and one of my lyrics, well, how to put this? won. Second place. I leaned on contests for a while to gain confidence and it turns out winning a song contest is like eating a can of cake frosting. Really exciting but not a lot of lasting benefits. Plus the confidence had to come from withint

I went to some workshops and got sucked in to the "how hard can it be" fallacy of songwriting. How hard is it to write a really good, marketable country song? Harder than you think. How hard is it to get a major label artist to record your song so that it ends up on the radio? A little bit harder than winning the lottery. But I'm hooked.

Since then , well, I guess I'm Really Doing It. My job as a writer is writing, filling my head with the music that's out there, making room for ideas by living my life, finding and working with co-writers, recording, getting critiqued, playing live, practicing, practicing more, pitching, publicizing, looking for singers, updating, researching the legalities, mourning losses and celebrating victories.

At this moment I have signed contracts with publishers and music libraries on most of my instrumentals and lots of pop songs. My songs play in retail rotation, somewhere, and I've actually begun getting quarterly royalty statements and sync fees. Really, really little ones.
I've secured some actual placements and look forward to "seeing" my song on TV, and I am loving the writing. I've recorded my own uke tracks, am close to placing some cinematic instrumentals, gotten comfortable on the guitar, learned to co-write with artists, been flattered some, been humbled some, and every day I'm so into my job.

In the songwriting context, that is. In the songwriter-education industry, there are lots of opportunities to get song feedback and critique, which I love and use. For the past couple of years, I've had access to an industry pro who's generally blunt, sometimes kinda caustic, and generally straight to the point from a commercial standpoint. I loved it. The first time she heard one of my songs, she hated it. So much. She thought that the verse was so long that she couldn't stand it (the chorus came in at about 45 seconds.) She wasn't rude or mean but she made it clear that the song was a little bit pathetic. I hate being treated like a beginner (it is, however, not The Worst Thing You Can Do to Me), and I was newer at this than I am now. I couldn't sleep that night and I felt raw and miserable from that kind of critical assessment. I can process all kinds of criticism and become grateful for it, but it's not pretty. She was right, and she helped me. A lot
Read more

I wrote plays in college and they ended up being produced. None of us knew about dramaturgy, the art of gently prying the script from the playwritght's hands and getting it into production in a way that benefits everyeone. I didn't know how to parse and understand criticism. I didn't know how to separate my powerful emotional wounds and colors from the ways that I needed to write about them.  So it came to pass that when I wrote my third play "All's Fair," I wrote about some personal stuff and I didn't have anyone to talk to me about how I'd written it and how to make it more effective, or anything. Playwriting had been incredibly lonely, even though the world was supportive and my shows seemed to do well.  "All's Fair" kicked me into a serious shame spiral and I had already been struggling with real life and my personal U-Haul of baggage anyway, and that's how I ended up "forgetting" about playwriting. I didn't make a c
Read more

Click here for new song vids I had my knee replaced in February. I thought it would be like, oh, this knee looks bad, let's just put in a new one. It was a little more complicated and a little more painful than that. But I've been feeling kinda mostly myself again, so I've gotten some work done, part of which was getting some songs videoed.It's been a rough year and a half and i've written some sad songs but this one is fun.  One of the rough things was losing one of my college friends, who passed away from cancer a couple of months after my dad died. I never know when I'm going to write a song about someone specific but this one just kinda happened all at once.    and this is kind of an old song but a fun one...   I've spent the last couple of weeks getting some vids of Blesser Heart done so you might want to check out our new website here.  I've also got a couple of sync songs cooking and I might even record some of those sad songs next time I am rec
Read more