I wrote plays in college and they ended up being produced. None of us knew about dramaturgy, the art of gently prying the script from the playwritght's hands and getting it into production in a way that benefits everyeone. I didn't know how to parse and understand criticism. I didn't know how to separate my powerful emotional wounds and colors from the ways that I needed to write about them.  So it came to pass that when I wrote my third play "All's Fair," I wrote about some personal stuff and I didn't have anyone to talk to me about how I'd written it and how to make it more effective, or anything. Playwriting had been incredibly lonely, even though the world was supportive and my shows seemed to do well.  "All's Fair" kicked me into a serious shame spiral and I had already been struggling with real life and my personal U-Haul of baggage anyway, and that's how I ended up "forgetting" about playwriting. I didn't make a c
Post a Comment
Read more

I've been in the recording studio for many hours in my life. I've learned a ton, and for the longest time it was the only way to get the songs out of my head and into someone else's. But one of the many gifts of the pandemic is this music marketplace called Soundbetter. When I could not get to the studio, I found a producer on Soundbetter, and a singer on Soundbetter, and the next thing I knew I had a pop sound that was what I've wanted all this time. The guy I worked with for several years was wonderful but I didn't always know how to explain to him the sound I wanted, and I needed a sound outside his preferred genres.  My first Soundbetter project was this weird sync song called "Safe": Working with Kate Malone, the producer, was fantastic. She got the vibe I was trying to create, she was affordable, she's a woman, and I've never met her. Never even heard her voice .  Then Kate got involved in a big project, or got tired of me, whatever, I'm
Post a Comment
Read more

June 23, 2021
Sometimes you're the pearl and sometimes you're the swine. This is another experience with criticism of my work that I wanted to tell you about. I used to send songs to industry people for critique. Sometimes it was not in real time; I'd get an email evaluation. Sometimes it was in "webinar" form, where I'd hear the instructor's voice over some kind of pre-Zoom platform and we could chime in with comments, or be bombarded by the industry person's invaluable insights, if any. I did one of these one time, early in my attempts to become "commercial" and make industry contacts. The facilitator was a music industry publisher person I'll call Karen.  I had written a song, a country song, about running into your ex at the grocery store. I didn't really understand country music, and my song was kind of jokey like a country song from 30 years ago, where country music was able to laugh at itself. Karen heard my song, and she really, really hate
Post a Comment
Read more

March 28, 2021
The pandemic was... well, you know. So many things. But one of the good things was my personal Esther (Biblical Esther) moment where I was kind of ready for such a time as this, because my weird grab bag of skills coalesced into the ability to make the pandemic music vid where everybody recorded their own part at home and we all sang together in our little windows. This is "Walkin' Papers" that we did, partly to serenade our friend Vicki, whose kidneys tried to kill her and she was in the hospital trying to get them to cooperate.  I had a lot of fun when people asked me if there's an app to make one of these. There isn't. Here's how I do it: Make a track for people to sing to. Have them video themselves singing their part to the track, wearing headphones. Get the vid from them - since the vid files are huge, and since Dropbox is a nightmare, this was one of the hardest parts. At this point I stripped the audio from the vid, dumped it into Cubase, tuned it in M
Post a Comment
Read more 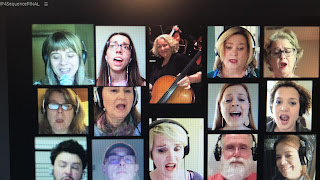 What an experience. I had tracks from 13 singers and one incredible cellist. I wanted the video with a separate little window of each singer, but it turns out that was beyond my video editing capabilities (but it isn't now); my friend Margaret Andrea got it done. The response was affirming and wonderful. I hoped to get singers together, make something beautiful, and lift people up on Easter. I think we did that. here it is on Youtube :  https://youtu.be/k5Ehw6sp0AE Some thoughts: 1) sending a track to someone of you singing a choral part all by yourself is a really brave thing. Particularly if that person is either a stranger, or someone you think might be perfectionist or judgmental or more talented than they really are. ahem. I tuned and edited every track, not because yall sang badly, but just to fit everything better. I enjoyed the heck out of all the ad libs, and I'm going to put them all together one day : "this ought to be good" "I've done t
Post a Comment
Read more 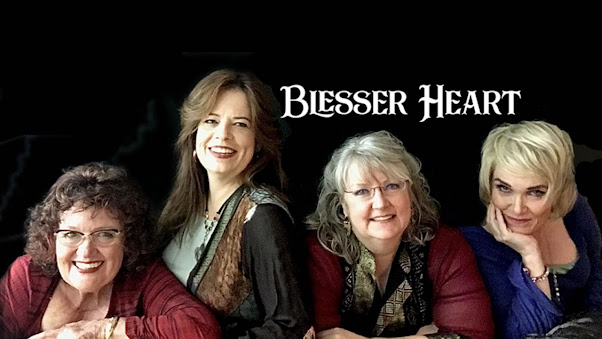 I have always had a harmony group. Now I have one again! Finding the girls, or rather noticing the girls that God sent. Getting us organized, arranging a lot of songs, rehearsing a lot, rehearsing some more, gigging while not having rehearsed enough... Now we've added a fourth, and the story there is pretty great too.
Post a Comment
Read more

June 05, 2017
For the past 5 years or so I have doubted myself as a performer more than I can believe. Before that I sang my own songs, sang in church (sometimes my own songs), sang professionally, recorded, etc. Didn't think much about it. But these past few years, for complicated personal reasons I am working through - and possibly because I really needed to be really, really humbled - it's been rough. If this were a Disney movie, there would come a beautiful moment where I realized that all this adversity has given me the gift of Believing In Myself, preferably with a Believing In Myself song. Nope, I don't have one. This isn't a Disney movie, so it's all messy and hard to see the good changes that are happening. Recently I got my feelings hurt and my fragile confidence kinda banged up by an incident of everyday sexism, which is too tedious to go into. It opened up the subterranean flood of sadness and lostness that is always in there, and boy do I hate that but whatever.
Post a Comment
Read more
More posts